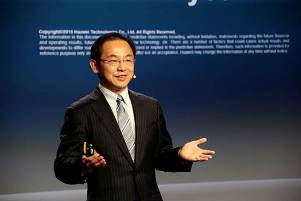 At the FT-ETNO Summit held in Brussels, Huawei executive director and Products & Solutions president Ryan Ding said, “5G will be one of the cornerstones of industry digitalisation. A single global standard is vital.”

Ding noted that developing a common standard for 5G will require open cooperation between all regions and countries, including Europe, Asia, and the Americas. In terms of technology, we should avoid multiple standards or standards lagging behind deployment. In terms of spectrum, we need global agreement on which spectrum is easily available. This way, we can cut costs and enable seamless interconnectivity around the world.

During the panel session, “Industry interview: Lessons in innovation, across continents and into technology”, Ding explained that there have been three waves of industry digitalisation. In the first wave, internet companies like Google and Amazon were the leaders. The second wave is sweeping through traditional service industries such as telecom and financial services. The third wave is just starting in the real economy, in industries such as automobiles, manufacturing, and power grids.

The next decade will, he said, be a decade of digitalisation of traditional industries. During this process, industries will play a key role and connectivity will be the cornerstone.

Europe has many leading global companies in telecoms, finance, manufacturing, and automobiles, where the second and third waves of the digital revolution are taking place. These companies will be the leaders of industry digitalisation. And Europe has the opportunity to lead this trend.

Ding added that a digital industry has three defining characteristics: all things are connected, all things are able to sense, and all things are intelligent. From connections between people to connections between things, 5G will be a key technology. Many regions and countries – such as the EU, China, the US, Japan, and South Korea – are pushing for 5G development. The EU, for example, released the 5G Action Plan on September 14. A single, global 5G standard is vital to reducing the cost of connectivity and bringing forward 5G deployment. According to Ding, as industries are going digital, governments should become more open; they should set policies to promote cross-regional and cross-industry collaboration, and push for uniform standards. This can drive down the cost of industry digitisation and accelerate innovation. The EU is bringing an open approach to the next generation of global communications standards and industry digitalisation standards.

The EU-led 5G Private-Public Partnership (5G PPP) includes members from both Europe and other parts of the world, such as Huawei, NEC, NTT DOCOMO, Samsung, and IBM. And more companies from outside China are now involved in China’s 5G and other related programs. For example, the members of the IMT 2020 5G Promotion Group include not only the Chinese company but also companies like Nokia, Ericsson, Samsung, NTT DOCOMO and Qualcomm etc.

In August 2016, Huawei, Ericsson, and Nokia were jointly awarded the contracts for three key research projects in wireless technology funded by the Chinese government; and Ericsson and Nokia are now members of seven of China’s 5G programmes. Many other European companies like Siemens, SAP, Bosch, Volkswagen, Audi, and BMW are also playing a role in China’s smart manufacturing and connected car projects.